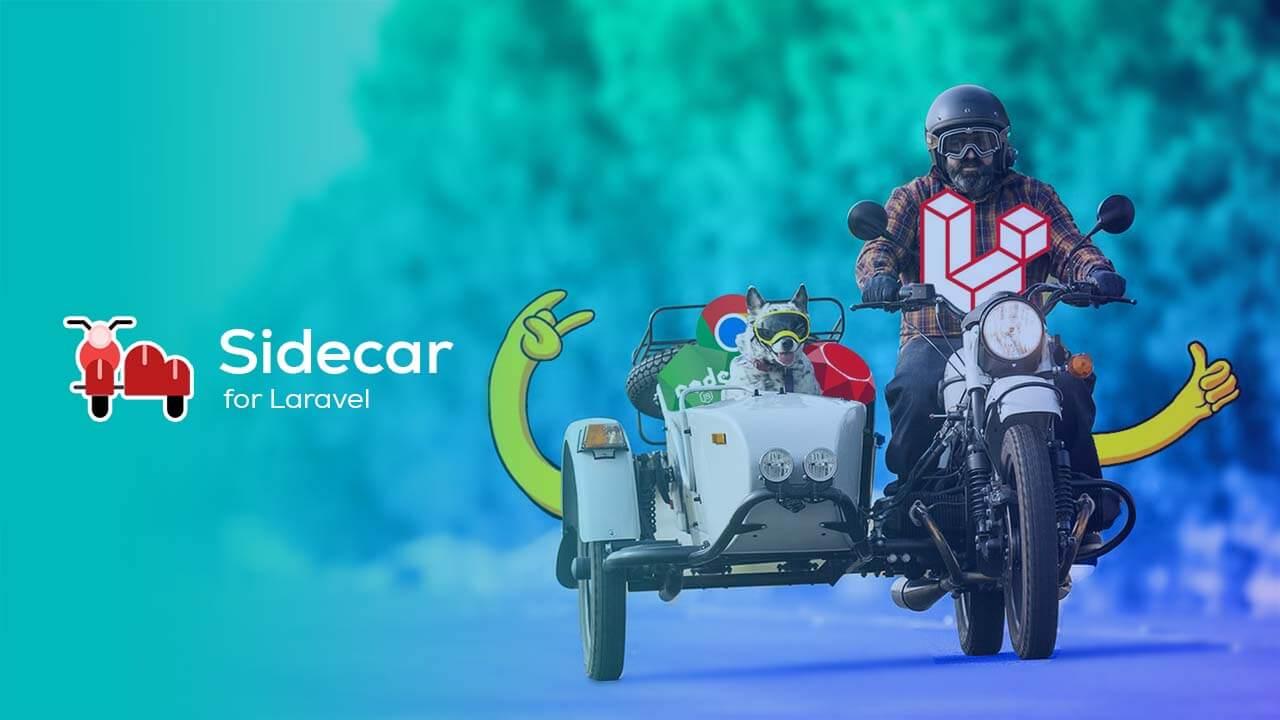 Sidecar is an awesome Laravel package that will allow you to run Lambda functions directly from your Laravel application. Meaning you can run Node, Python, Ruby, Java, Go, and many others through a Lambda function from inside Laravel. Truly Mind-blowing!

In this tutorial, you'll learn how to install, configure, and run code using Sidecar. First; how about a quick example to get you excited about this package 👏

Here is a quick example of a Sidecar Lambda function.

The first file defines how it will be deployed (App\Sidecar\ExampleFunction.php), and the other will be the file that gets deployed as your Lambda function (sidecar/example.js).

After deploying this Lambda function, you'll then be able to call it from your Laravel application and see the output on the screen. 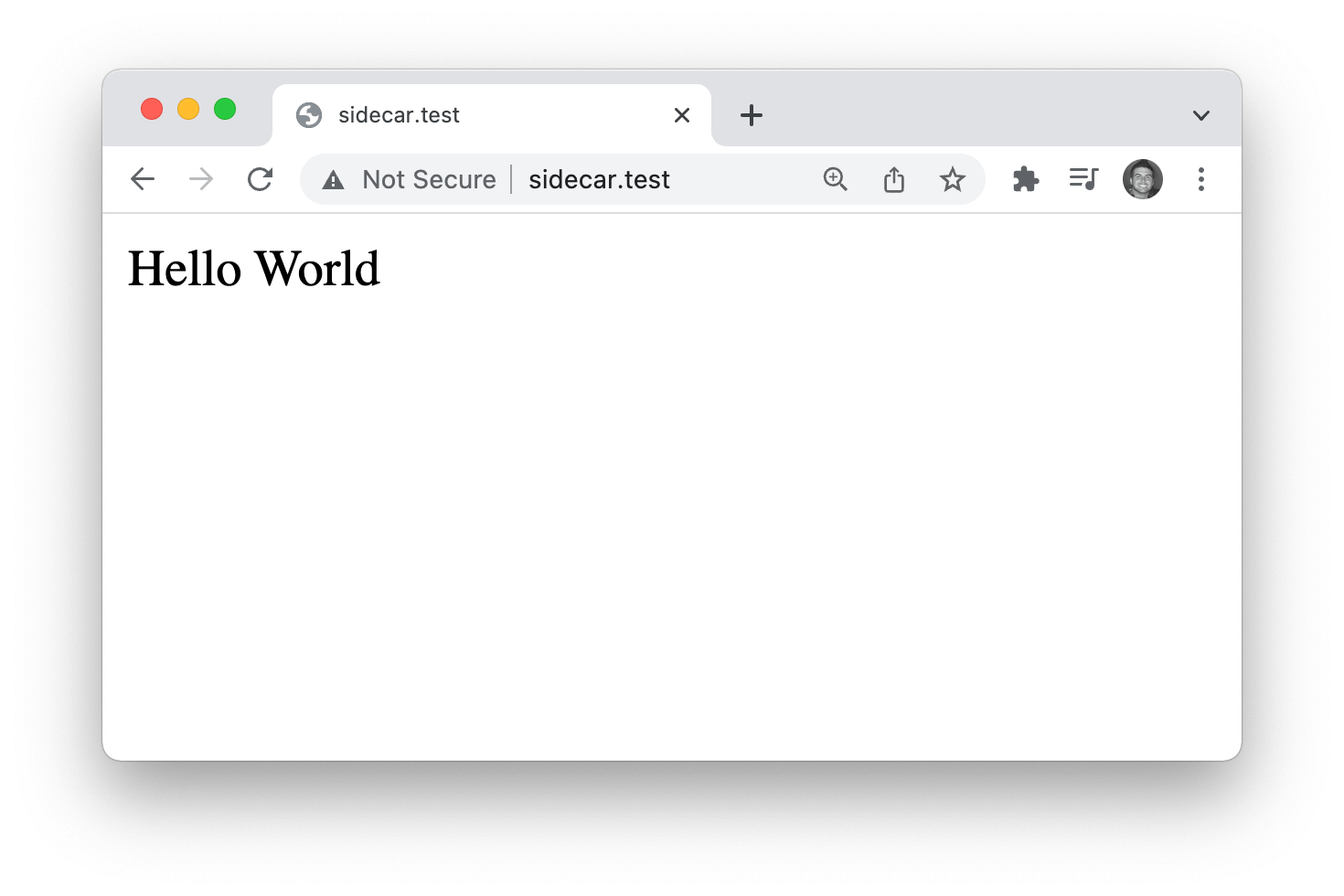 Creating Lambda functions with Sidecar is pretty simple and super powerful. So, let's dive into this tutorial and show you how to set up a Lambda function, configure it, execute it, and do a bunch of other cool things!

Installing Sidecar is very simple. Inside of an existing or new Laravel app, install the sidecar package with the following composer command:

After that's completed, you'll want to go into that directory and run the following artisan command:

That's pretty much it! Installation is effortless, and same goes for the configuration steps 🙌 Let's do that next.

Sidecar has built-in configuration steps to help you configure AWS with your application. To get started, run the following command:

You will be presented with a few prompts for adding your AWS key, secret, and region. These prompts will also setup an IAM user and a bucket with the correct permissions to execute your AWS lambda functions 🕺 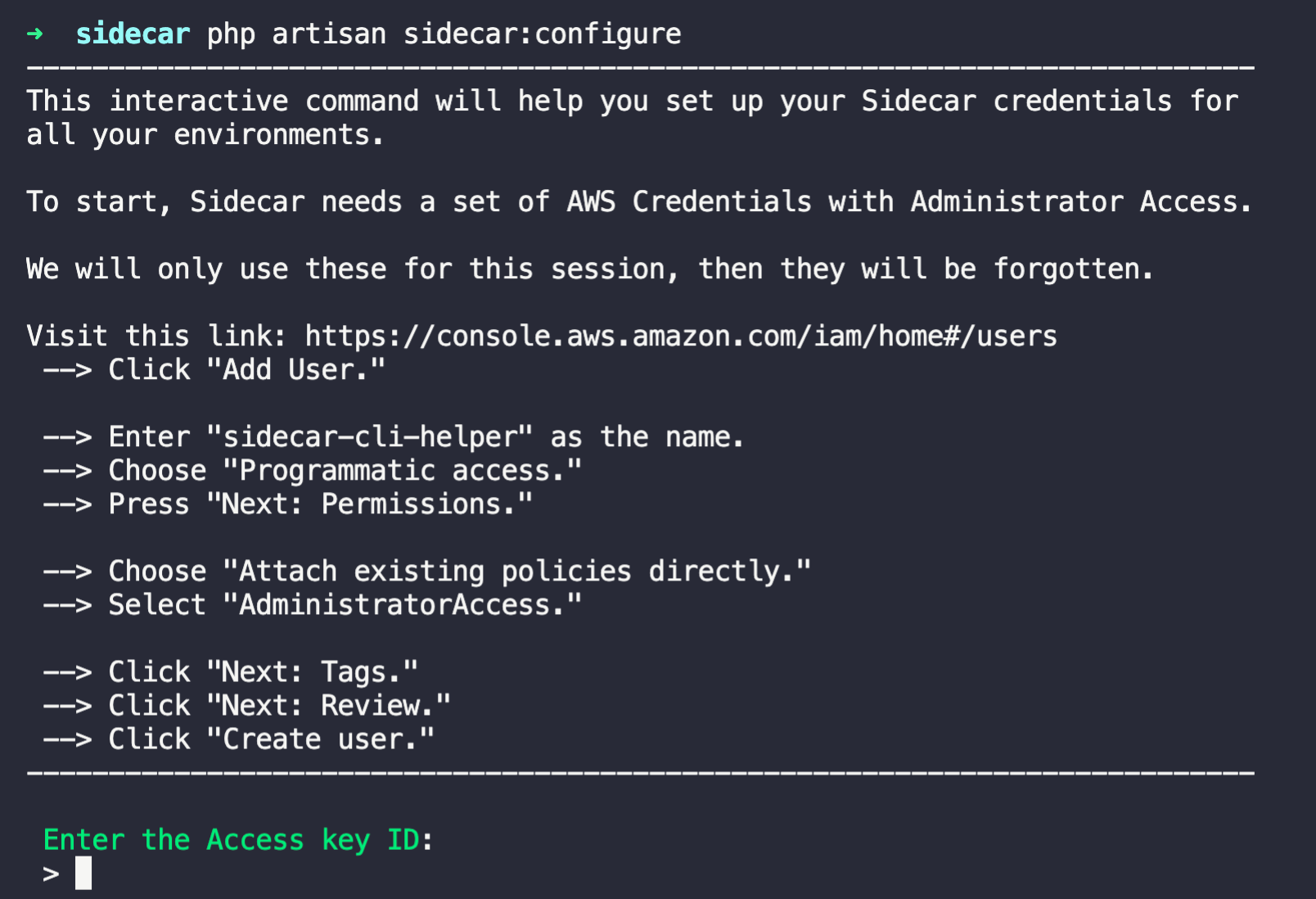 Below are the .env variables that Sidecar will need.

Now that we have Sidecar all setup, let's have some fun running Lambda functions 🎉

There are three simple steps to follow to create a simple Lambda function.

For this example, we are going to create a simple Node JS script, so let's create a new class located at App\Sidecar\NodeJSFunction.php with the following contents:

In this file, we need to define two methods, the handler() and the package(). This class defines our Lambda function and our entry point.

Next, we need to create a file located at sidecar/index.js, the entry point for our Lambda function. This file contains a simple Node script that will print out a simple message. Here are the contents of the index.js file:

3. Add our Function to the Config

Now that we have our function class and our entry point file, we need to add our function to the config/sidecar.php configuration file. Inside of the 'functions' => [] array we will add our Lambda class, like so:

Awesome! We just created our first Lambda Node function with Sidecar 🕺 Now, we need to deploy it.

We can quickly deploy our new Lambda function with the following command:

If everything gets deployed successfully, we'll see an output that looks like the following:

You'll also be able to visit your Lambda Dashboard and see your Lambda Serverless function in the list.

Next, we may want to test the output by running our Lambda function directly inside our Laravel application; let's dive into that next 👇

We can execute our Lambda function with the following command:

It might be best to view this output from a route. Open up your routes/web.php and replace the homepage route with the following:

If you open up your browser, you'll see your NodeJS Lambda function execute and display the contents on the screen.

🧙‍♂️ Pass Data to our Function

Let's modify our sidecar/index.js to have the following contents:

Then, let's deploy our updated Lambda with the following command:

Now, we can pass data to our function by updating our routes/web.php file to look like this:

If we visit our home route inside of a browser, we'll now see the updated output: 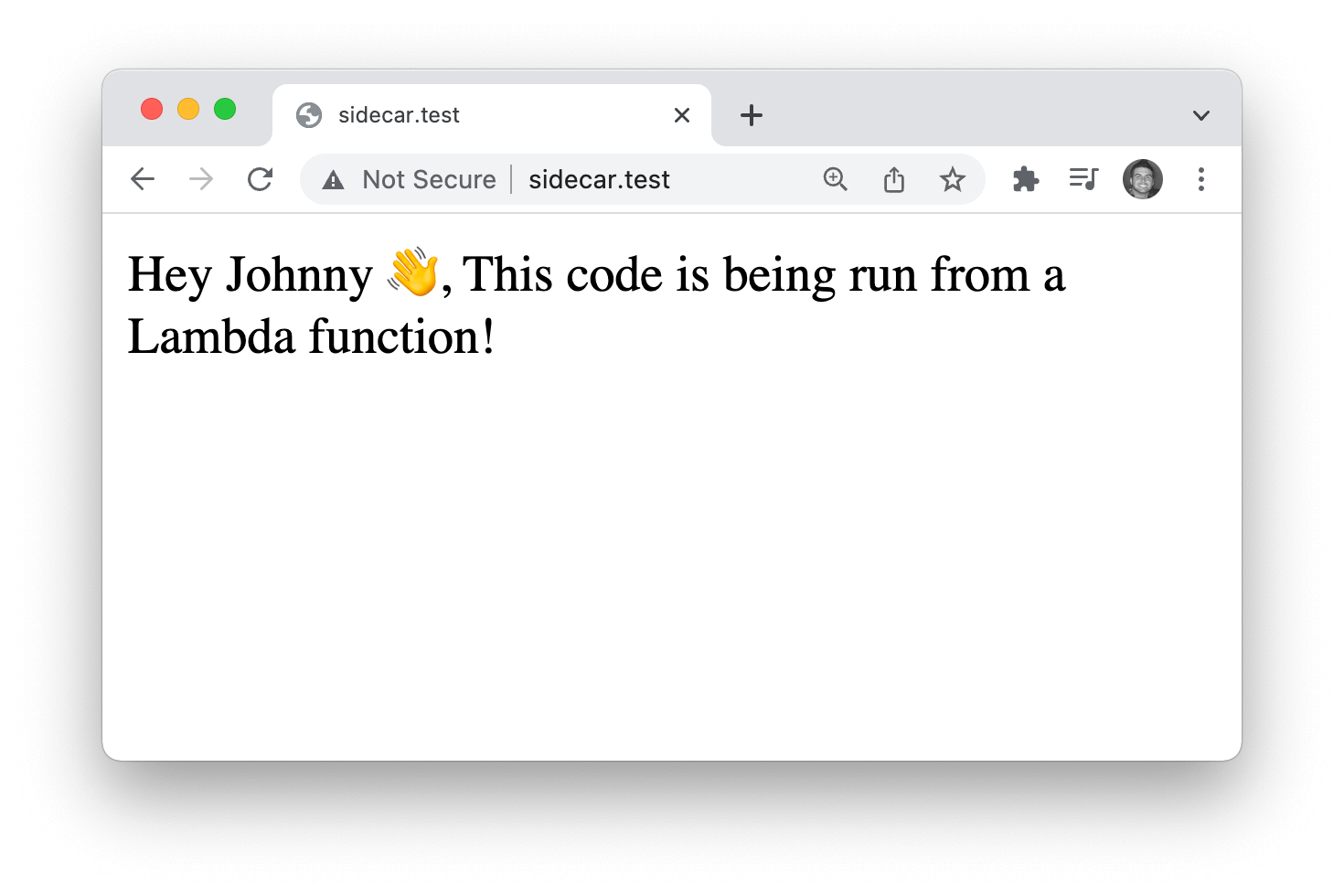 Instead of "Hey Ma", we now see the message "Hey Johnny", which is the name that we passed to our Lambda function. How cool is that!

Using Sidecar and Lambda, we specify what kind of code we want to run. Say, for instance, that we want to execute some code in Python, we could easily create a new class PythonFunction inside of our App\Sidecar directory with the following contents:

You may have noticed we have a new method in this class called runtime(), you can find the Sidecar Supported Runtimes here. Keep in mind that you can create any runtime that you want; these are just runtimes supported out of the box.

Next, we'll create our Python script at sidecar/index.py with the following contents:

We are using index.py, but you can choose any filename you would like; make sure to call it accordingly in your Lambda Class.

Then, we can add this to our config/sidecar.php:

Finally, we re-deploy our Lambda functions:

If we change our home route inside our routes/web.php to the following:

And we visit our home route in a browser; we'll see the following output: 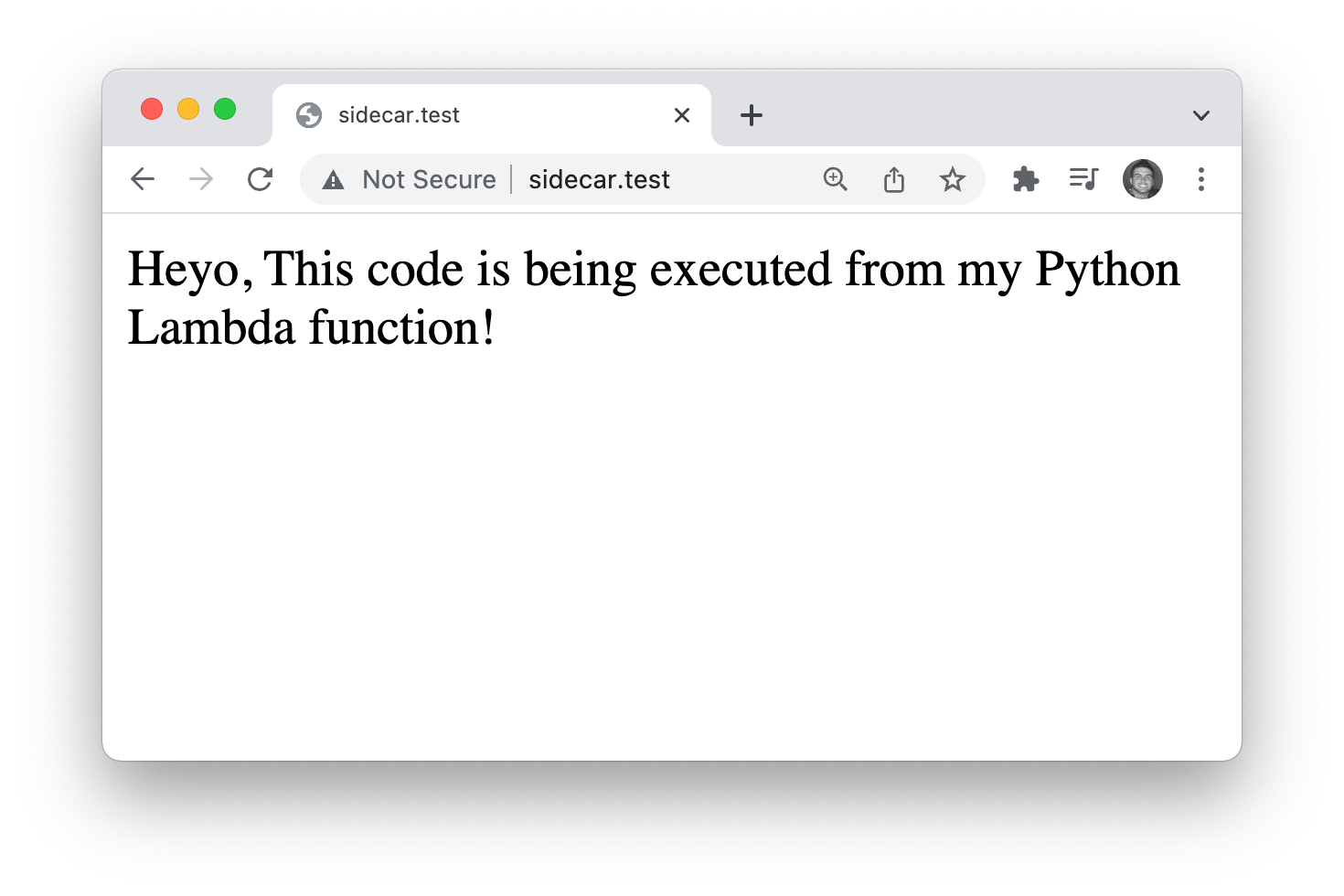 You can also check out your Lambda dashboard, and you should see that we now have two functions in the list, one for our Node function and the other for our Python function 🙌

Superb! We can pretty much run any programming language from our Laravel application and isolate it inside of a Lambda function 🤯

You can learn more about using Sidecar by visiting the official documentation at https://hammerstone.dev/sidecar/docs/main. Additionally, you will probably be interested in viewing Aaron Francis' Laracon talk where he shows you in a video most of the stuff that we covered above.